The internet likes its memes, and Throwback Thursday happens to be one of them. While I admit it is somewhat silly, at the same time, it might be interesting to look back every odd Thursday at photographs of the Arctic of yesteryear. In a region changing as quickly as the Arctic, and where the stories woven about its people and places are so often about the future rather than the past (e.g. When will the ice caps melt? What shipping lanes will be open by 2050? When will the new oil field come on stream?), it’s worthwhile to look back at how the Arctic was a mere 50 or 100 years ago.

To start off the series, here are three photographs of people in the Aleutian Islands that I came across on the United States Library of Congress’ website. Their online resources boast thousands of photographs that are free to reproduce and within the public domain.

This first photo was taken in August 1938 by the photographer V.B. Scheffer and is part of the 175,000-photograph Farm Security Administration – Office of War Information Photograph Collection. From 1935-1944, the U.S. government funded the photographic documentation of American life, including rural and urban conditions. Three of Scheffer’s photographs taken in the Aleutians are included in the collection, and they illustrate a way of life about as rural and remote as one can get in the U.S. The Aleutian Islands are closer to the eastern Russian city of Petropavlovsk-Kamchatsky than Washington, D.C.

Living on the far-flung arc of volcanic islands in the Pacific, the Aleutians are a people separate from many of the other indigenous groups in Alaska, even the nearby Alutiiq and Yup’ik. (Here is a map of the indigenous peoples and languages of Alaska.) Aleuts, known as Unangax in their native language and Алеуты in Russian, inhabit the Aleutian Islands, while a small population remains in Kamchatka Krai in Russia, across the Bering Strait. The Aleuts probably crossed over from the Eurasian landmass into the Aleutian Islands 9,000 years ago. Studies of their genetic structure are fascinating and reveal the high degree of admixture spurred by the centuries of traders, fishermen, and people moving throughout the North Pacific. A paper published in Human Biology in 2010 notes, “The underlying patterns of precontact genetic structure based on Y-chromosome markers of the Aleut populations is obscured because of the gene flow from Russian male colonizers and Scandinavian and English fishermen.”

While the Scandinavian and English genetic markers may be surprising, the Russian influence is obvious, for not only was Alaska (and the Aleutian Islands) part of the Russian Empire until its purchase by the United States in 1867. There was also a great deal of mixing as well between European Russians and the indigenous peoples they encountered during their centuries-long eastward expansion. One Alaskan website claims, “Alaskans generally recognize the Russian occupation left no full-blooded Aleuts.” Relatedly, the caption of the first photograph explains:

“The population of the Aleutians, which is sparse, consists mainly of Aleuts and a few Russian and Russian-Aleut types. The Aleuts are a mongoloid people and are quite distinct from the Eskimo. Even in the cold, foggy Aleutians, youngsters like to go barefoot, as this picture shows. The Aleuts are under the protection of Interior Department’s Office of Indian Affairs.”

The caption also speaks volumes about government attitudes towards Alaska Natives and indigenous peoples in general. The fact that the caption states that the Aleuts were “under the protection” of the extant Bureau of Indian Affairs highlights the government’s long history of misguided paternalism. The photograph was taken two years after the Indian Reorganization Act was applied to Alaska, which was intended to try to grant Alaska Natives more independence and powers to self-govern. The Act, for instance, granted “Any Indian tribe, or tribes, residing on the same reservation, shall have the right to organize for its common welfare” (Section 16). Yet still, as the photograph’s caption notes, the government continues to claim them to be under their “protection.”

In the first photograph, notice the boy with the bowl cut in the bottom row, second from the right. Here he is again, this time by himself.

“This booted and overalled young man is an Aleut. He clearly shows his kinship with the people of Asia.”

While the tone of the caption is admittedly old-fashioned, the noted relationship between Asia and the Arctic and the long history of encounters between the two regions recalls a guest blog post I wrote for the University of Nottingham’s China Institute Policy Blog in March on ancient ties between China, northeastern Russia, and the North Pacific.

Finally, the third photo, of a man sitting outside a fox ranch in the Aleutian Islands next to what appears to be an upside-down boat. 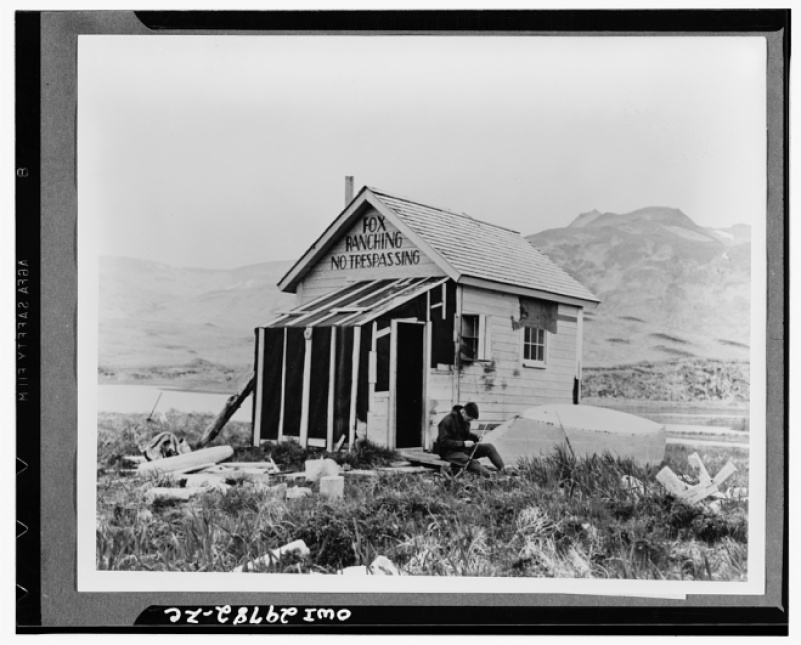 “Fox ranching is about the main commercial operation on the various inhabited Aleutian Islands. The islands form a vast wildlife refuge but fox ranching is permitted under license by the United States Fish and Wildlife Service of the Department of the Interior. There are very few wild animals on these islands although there were once a number of wild foxes. The foxes which form the basis of the Aleutian industry were generally imported.”

The introduction of foxes, first for hunting and later ranching, underscores my point earlier this week about the Arctic’s long history of anthropogenic environmental change. The “FOX RANCHING – NO TRESPASSING” sign on top of the building simultaneously captures the regularization and industrialization of fur production and the introduction of private property into the Aleutian Islands beginning with the arrival of the Russians in 1741. Almost two centuries prior to this photograph being taken, the Russians essentially conscripted the Aleuts into the global fur trade. In fact, it was Russian fur traders who gave them the name “Aleuts.” But they also bestowed upon to them many other problems. A story recounted on the Alaskan website referenced above recounts a story that sheds light onto how damaging the fur trade was for indigenous peoples and the environment up and down the western Pacific coast:

“In 1811, in order to obtain more of the now commercially valuable otter pelts, a party of Aleut hunters traveled to the coastal island of San Nicolas, near the Alta California-Baja California border. The locally resident Nicoleño nation sought a payment from the Aleut hunters for the large number of otters being killed in the area. Disagreement arose, turning violent; in the ensuing battle nearly all Nicoleño men were killed. This, along with European diseases, so impacted the Nicoleños, that by 1853, only one living Nicoleña person remained.”

In the Aleutian Islands, once the fur trade had almost rendered the local otter population extinct, fur traders introduced Arctic foxes (the same animal that’s now almost extinct in the European Arctic, as I mentioned the other day) to the islands. This had a number of negative consequences for the ecosystem, described here in more detail.

Four years after these photographs were taken, the Aleutian Islands would again be wrapped up in global events. The Japanese invaded the westernmost islands of Kiska and Attu in 1942 and occupied them for over a year before the Americans were able to launch a campaign to retake them. The Aleutian Islands may be geographically remote, but that has not prevented the forces of trade and war from ensnaring them.

Canadians find ship, lost for 150 years, in Northwest Passage
In Newfoundland, a glimpse of the Arctic’s past and future
San Francisco: The 20th-century golden gateway to the Arctic
Eimskip in Maine: a saga for the 21st-century Arctic