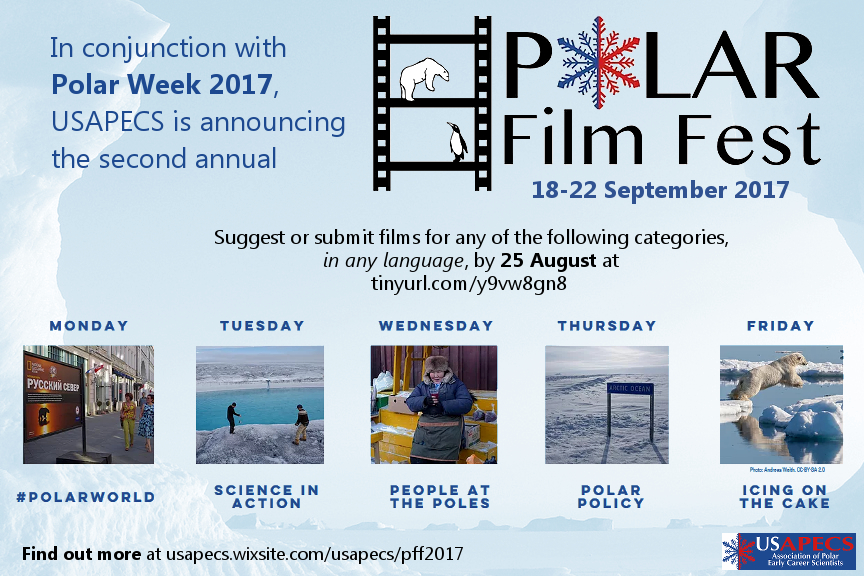 Following the success of last year’s Polar Film Fest 2016, I’m leading US APECS’ organization of the second-ever Polar Film Fest, which will take place from September 18-22 during International Polar Week. This year’s theme is #PolarWorld, so we’re looking to showcase the best the planet has to offer in movies about the Arctic, Antarctic, and wider cryosphere – no matter what language they’re in.

We’re looking for film suggestions that fit any of the following themes:

1) #PolarWorld: Polar Issues are Global
2) Science in Action: Working in Extremes
3) People at the Poles: The Human Dimension
4) Polar Policy: Preparing for the Future
5) Icing on the Cake: Frozen Fun

Film eligibility and submission
We invite you to please submit your suggestions by August 25 through the Google Form we’ve set up. Films may be original or produced by someone else. To submit your own film, upload it to a video sharing site (i.e., YouTube or Vimeo) and submit the link, along with a description of the film and a note indicating that you made the film, on the submission form. Films produced by others must be available publicly online. Films that can be watched for free are preferred, but please do not submit links to illegal streaming websites.

In-person and virtual watch parties
Once the films have been selected and curated, organizers from US APECS will be putting together a schedule with virtual and in-person watch parties. If you’re interested in organizing an event, please get in touch!

Spread the word!
Please share this email and the above graphic with your networks. The more submissions we have, the better.

New article in a new outlet, Roadsides, published
New article on Asia & the Arctic in Eurasian Geography and Economics
Seminar today: Asian interest in the Arctic Council
Arctic TV Show, “Journey to the End of the World,” airs tonight