In the middle of February, after five and a half sleepless hours in the window seat of a diamond mining company’s airplane, I descended into the sparkly blue mists of eastern Siberia.

In the middle of February, after five and a half sleepless hours in the window seat of a diamond mining company’s airplane, I descended into the sparkly blue mists of eastern Siberia. Ribbons of frozen rivers meandered across the taiga, along with a surprising amount of straight lines – likely surveyor’s roads for oil and gas exploration.

Twenty minutes after our descent began, the other passengers and I were clanging down the metal steps into the 15°F air. The rising sun was starting to turn the skies pink. We were hustled quickly into a small room with a metal roof: the baggage claim. In here, the temperature was a blasting 85F – a preview of the constant and inescapable contrast between the Russian Far East’s super-heated indoors and super-cooled outdoors that I would experience for the next month.

I had come to Mirny City in the Sakha Republic (Yakutia) for a PhD course in Arctic extractive industries. From street level, Mirny is an unassuming town with a population of under 40,000 that has hardly shed its Soviet aesthetics. But appearances are deceiving, for Mirny is the diamond mining capital of Sakha, a region which produces some 25% of the world’s diamonds. The creamy paint on the church and airport, for instance, was a technological spillover that emerged out of the operations of Alrosa, the regional and global giant in diamond production. The partly Russian- and Sakha- state owned company, which also runs the airline I arrived on, controls approximately a third of world diamond production.

Mirny is also famous for having one of the world’s largest open-pit mines, Mir, which is just outside of town. The mine was opened in 1955 and is four degrees south of the Arctic Circle. As a museum guide explained, the Soviets originally intended for the town to be a fly-in, fly-out sort of operation. But so many workers ended up bringing their wives and having children that a permanent city sprung up on the edge of a giant pit.

Being in Mirny was akin to being on the moon. While heading to morning lecture, the only sound I would hear was the crunching of people’s boots on the snow as their fur coats swished behind them. On one of the main boulevards, an enormous, sun-faded poster of Yuri Gagarin, the first man in space, beamed down from the side of a hospital. To add to the feeling of otherworldliness within Russia, many people appeared Asian – a testament to the large degree of Yakuts, a Turkic people, living in Mirny and working in the diamond mining industry. Approximately half of the population of the entire Sakha Republic is Yakut, and there is also a large population of Central Asians across the Russian Far East. 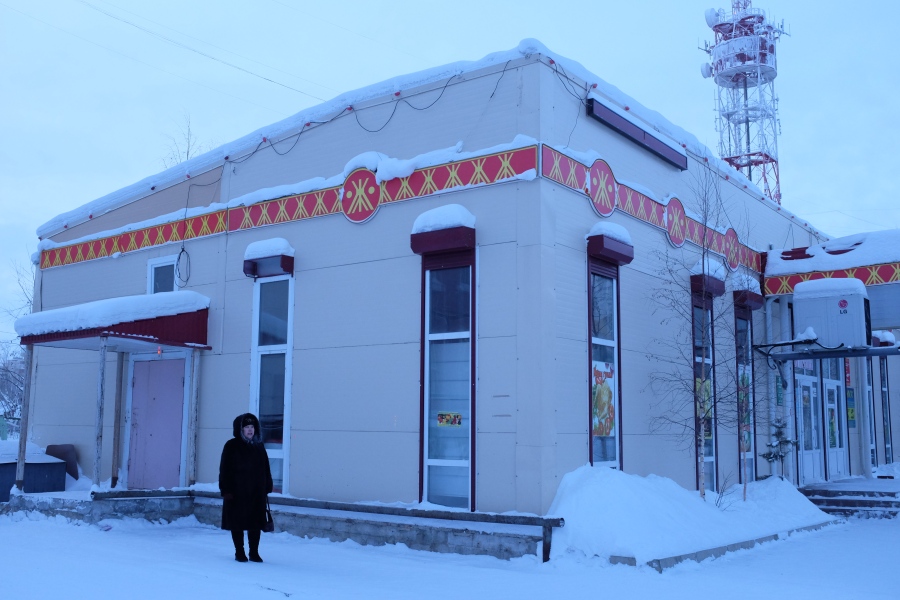 Despite its lunar-like remoteness, Mirny, like so many seemingly isolated places across the Arctic and sub-Arctic, is intricately woven into global currents. I met a taxi driver from Kyrgyzstan and two Ukrainian refugees at a local bar working in the diamond mine. They may have come as part of the Russian government’s alleged plan to resettle up to 40,000 Ukrainian refugees in the underpopulated Russian Far East, bringing with it echoes of the Soviet Union’s forced migrations of Ukrainians to the region. A hotel receptionist I chatted with had spent time working in Ireland. The clearest example of Mirny’s imbrication into global networks is the simple fact that one in every four of the world’s diamonds came out of a hole in the ground not too far from this infinitely sized town square – only to eventually end up in a warehouse in Antwerp before being polished by a jewel cutter in a place like Israel, India, or Thailand – and then ending up on a bride’s hand somewhere, someplace.

Mirny was just the first stop in a month of research and traveling I did in the Russian Far East. In the coming weeks, I’ll post photographs and recollections of my time in this vast territory, which is extremely sparsely populated. Only 7.4 million people in an area that constitutes one-third of Russia. Yet still, there are several big cities like Khabarovsk and Vladivostok. These places, both near borders with the East Asian countries, are surprisingly dynamic and even cosmopolitan in a certain way. Time and again, my experiences illustrated that the region does not deserve its reputation for being a time-warped Soviet snowglobe. The Russian Far East is far from most people’s minds, even within Russia – but the reverberations of international developments is possibly easier to detect here than in places like, Moscow, where so much is happening all at once that it’s hard to disentangle global causes from local effects.

Below are some snapshots of the people I encountered during my 2,500-kilometer journey across this land that, though sparsely populated, is rich with stories of the human experience that are often hard to believe but for opposite reasons: yes, some people here did grow up on Soviet collectivized reindeer farms, but many teenagers often listen to K-Pop, spend hours on instagram, and rush to the cinema when a new Marvel movie is released – just like young people in many other parts of the world.

As one teenage girl I met expressed, “Some Russian people say that we are riding on reindeer, but we are not. They think we are not civilized, that we live in a world of winter and snow.” Certain aspects of this stereotype are true, but the actual picture is a much richer mosaic.

Putin seeks joint council with Canada to discuss boundary issues
Canada to inquire about Russian military activities in Arctic
A thaw in relations between Russia and Canada?
Monchegorsk, Russia: an eco-friendly inferno