The world’s largest island has risen to the lofty ranks of Lonely Planet’s Top 10 countries to visit in 2016. This past October, the travel guidebook publisher included Greenland on its top 10 list with traditional tourist magnet countries like the USA, Japan, and Australia, along with a couple of tropical archipelagos: Palau and Fiji.

Anders Stenbakken, CEO of Visit Greenland, a tourism company wholly owned by the Government of Greenland, expressed, “It is a great honor to be a part of the travel magazine and to be selected as one of the World’s Best Destinations 2016. The increased focus on Greenland as a unique travel destination is due to the fact that more and more travel agencies have included Greenland in their travel programs. New products are continuously developed and several air routes have opened, still with more to come. With a combination of improved marketing as well as higher accessibility of the country, Greenland is now a destination where travelers can make their dreams come true.”

I communicated over email with Kirstine Dinesen, marketing coordinator at AW Media, an online communication agency collaborating with Visit Greenland about the country’s inclusion in this list. She noted, “For many years Greenland has been neglected by world travelers as the country often is associated with nothing but ice and snow. But the Arctic country has much more to offer. The world just has to recognize this. Hopefully the inclusion of Greenland makes the world see the unique adventures the country holds.”

Dinesen extolled Greenland’s impressive nature as one of the reasons for the country’s inclusion on Lonely Planet’s list. “Greenland holds a large variety of Arctic adventures,” she wrote. “Most tourism activities are active as the nature and the landscape are a huge part of the beautiful world of Greenland. More specifically, what sets Greenland out from other destinations is The Big Arctic Five including Dog Sledding, Whale Watching, Meeting Pioneers, Exploring Ice and Snow and the Northern Lights. These five Arctic attractions are considered as the core of the Greenland adventure.” Greenland’s reputation for having pristine and untainted landscapes, however, could one day be blighted in a way similar to how Canada, once a global environmental paragon, has fallen from grace with the growth of Alberta’s oil sands industry.

Mining – a new core of the Greenland adventure?

The potential rise of the mining industry in Greenland could jeopardize the “pioneer” communities and the dramatic and unindustrialized landscapes that form the “core of the Greenland adventure.” Greenland’s inclusion in Lonely Planet’s list comes at a time when the country is still known for its glaciers, whales, and dogsleds. But soon enough, it could also be known for mining and extraction, just like Western Australia or Minas Gerais, Brazil.

In Greenland, extraction of metals and gemstones is not entirely new. Previous efforts to mine copper, graphite, and cryolite met with varying degrees of success and failure. No industrial mining has taken place in the country since the 1990s, when the Black Angel lead-zinc-silver mine closed. Symbolizing the heady times of the mid-2000s, when commodity prices were high and the global financial crisis hadn’t yet hit, a UK-based company considered re-opening Black Angel, which still has about 10-20 years of production left in the ground. The company, however, went under in 2013, and the minerals still sit waiting for the right investor at the right time.

Fast forward to 2015, and Greenland’s mining business looks like it may be gathering momentum again. This is in part due to the Greenlandic Parliament’s hotly contested overturn of a 25-year ban on uranium mining two years ago. Greenland’s two major political parties, Siumut and Inuit Ataqatigiit (IA), both support the development of the minign industry, but Siumut (which currently leads the majority coalition) opposes uranium mining while IA favors it. Many in Greenland believe that mining, if it were profitable and sustainable, could pave a path towards full sovereignty from Denmark by eliminating the need for the annual 3.5 billion DKK block grant from Copenhagen (~USD $500 million). However, with a 2014 report by the Universities of Greenland and Copenhagen stressing that mining will not be enough to fuel Greenland’s economy, the government has been trying to develop other sectors like tourism (and bottled water), too.

Signaling mining’s recent headway in Greenland, Canadian mining company True North Gems announced that it has received approval to begin extracting ore and waste rock at the Aappaluttoq Ruby and Pink Sapphire deposit in southwest Greenland. Their website states, “Pure and pristine, emerging from the frozen landscape of Greenland are stunning red gems. Produced in collaboration with the local community and with steadfast devotion to the environment, we pride ourselves on what will become the first Arctic ruby mine brought into commercialization.”

It’s almost the same type of language that one might expect to read in a Lonely Planet guide book to the world’s mines.

Also in southern Greenland, Australian-owned Greenland Minerals and Energy (GME) is planing to start a mining license application process for its Kvanefjeld rare earths-uranium project in the first quarter of 2016. GME, as Jichang Lulu reports, has a non-binding agreement with a listed arm of China Nonferrous, a state-owned Chinese mining company. The Kvanefjeld project could thus possibly supply a new rare earth elements separation plant that another subsidiary of China Nonferrous will open next year in southern China.

Early next year, GME will release the outcomes of its feasibilitysStudy. The president of an environmental non-profit, Avataq, however, isn’t holding his breath. Mikkel Myrup remarked to the Greenlandic Broadcasting Corporation, “There are studies that show that the environment, animals, and people around an open-pit mine are affected. So it is no use to say that we need to wait for an Environmental Impact Assessment to have an opinion on this.”

If rare earth mining goes ahead, Greenland will join another select list of countries: those that produce these metals needed for automobiles, precision-guided missiles, smart phones, and wind turbines. The 2014 list of top producers includes, in order: China (by far the heavyweight producer), the U.S., India, Australia, Russia,Thailand, Malaysia, and Vietnam.

If rare earth mining in southern Greenland sounds extreme, consider the Citronen Zinc-Lead Project at the northernmost tip of Greenland. The owner, Ironbark Zinc Limited, describes the location as “on the doorstep of Europe and North America” without a hint of irony (though I suppose if they are referring to Svalbard and Ellesmere Island, they might be right). The site holds an estimated 13 billion pounds of zinc, or 2.4 trillion pennies. While zinc prices have been low in recent years, a decrease of global stockpiles means that investors believe the price may soon start to recover – possibly to the point where it makes economic sense to construct what would be not only the world’s northernmost mine, but also the world’s northernmost settlement. The feasibility study is an incredible read, for it is both amazing and scary that humans are already thinking about building common rooms that “will include a small kitchen area with coffee machines and dishwasher, a relaxing area with sofas and armchairs and an area for dining” at 83°N. IKEA should be issuing a special edition catalog of furnishings for Arctic mines any day now.

Can mining and tourism coincide?

Visit Greenland doesn’t include mining in its list of activities, but it’s possible to imagine a future in which mining and tourism are combined and both spun as “pioneering activities.”

However, a disaster at the Kennecott Utah Copper Mine in 2013 exemplifies the risks associated with this. The mine, which is right outside Salt Lake City and just so happens to be the biggest pit in the world, used to have a visitor’s center, but it was closed as the ground beneath became increasingly unstable – and fortunately before a massive landslide occurred in 2013, costing Rio Tinto an estimated $1 billion to clean up. This disaster pales in comparison with the bursting of BHP Billiton’s two tailings dams in Minas Gerais, Brazil last month, killing at least 17 people and submerging entire towns in toxic mud.

Now, to see Utah’s Kennecott open pit mine, tourists can visit a nearby 9,000-foot mountaintop to gaze down on the deep scar in the earth – excitedly described as “so large that it’s visible to astronauts in the space shuttle – almost a mile deep and nearly three miles wide!”

Maybe one day, astronauts will look down and see a massive hole carved into the icy northern tip of Greenland, illuminated by the northern lights. 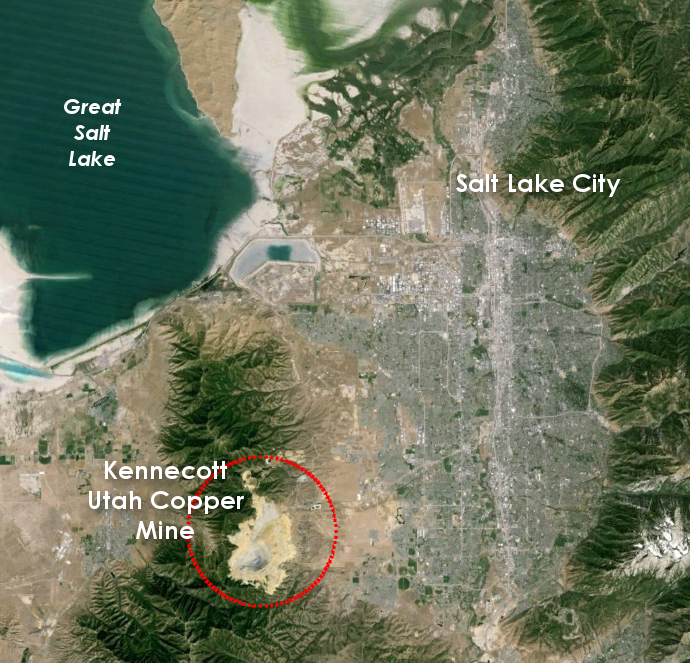 Mia Bennett is an assistant professor in the University of Hong Kong's Department of Geography and School of Modern Languages & Cultures. She specializes in the politics of infrastructure development in the Arctic and combines fieldwork and remote sensing in her research.