This summer in Helsinki, I found token signs of the country’s Arctic identity, which I discussed in a post called “Finland: An Eastern Arctic Nation.” There was a street called “Auroragatu,” market booths selling reindeer hot dogs and fried fish from Lapland, and a tourist agency advertising trips to the Arctic.

But when I arrived in Russia, I realized that it was another northern beast altogether. Especially – or perhaps even – in the capital of Moscow, the country’s Arctic identity was hard to forget.

St. Petersburg has long been the country’s northern capital, and it was from this former imperial seat that many northern expeditions were planned and launched. The city is farther north than Moscow and experiences the phenomena of White Nights thanks to its high latitude. But Moscow, the beating heart of modern Russia, is where the contemporary Russian national identity is forged and displayed. President Vladimir Putin has emphasized the Arctic dimension of Russia’s identity, remarking in 2010, “To be honest, Russia is a northern country.” And it is in the streets of Moscow where the Kremlin’s increasing propensity to look north shines through in the state-sponsored public art.

The icons of Russian propaganda

Propaganda has a storied history in Russia, most famously under the Soviets. Lenin launched a strategy of “Monumental Propaganda” to instill revolutionary, communist ideas in the Soviet people. Enormous banners were unfurled on the sides of buildings and statues were erected to figures like Fyodor Dostoevsky, the celebrated author, and Alexander Herzen, the “father of Russian socialism.” While Lenin’s plan was not entirely a success due to a lack of funding in the 1920s, large-scale, publicly accessible and viewable art, whether or not you want to call it propaganda, is still important today. For instance, since this year marks the 70th anniversary of the Soviets’ victory in World War II, the state has paid for banners to be erected everywhere commemorating “70 Years of Victory.” Such decorations can be found in roadside cafes in the middle of nowhere and on the main boulevards in Moscow. Russia is a huge country, but one shouldn’t discount its ability to propagate a specific iconography across its territory. On a smaller (and more edible) scale, I even came across an ice cream brand called “Victory.”

So how does the Arctic figure into contemporary public art scene in Moscow?

While walking the city streets under the blazing August sun, I came across two different photo exhibits, one which was specifically dedicated to the Arctic. Located a few blocks from the Kremlin, this exhibit (called “The Russian North”) was sponsored by National Geographic Russia, the Russian Geographical Society, and the Republic of Sakha, which is located in the Russian Far East. Sakha is Russia’s largest subnational unit (about equivalent to India) and contains a large amount of territory north of the Arctic Circle. Sakha has also been trying to develop its northern activities and policy; last year, the President of Sakha even gave a speech at the Arctic Circle forum in Iceland. The RGS, for what it’s worth, is an organization of surprising national stature. It has sponsored exploration of the Arctic and other parts of Russia since its inception in 1845, including Putin’s recent journey to the bottom of the Black Sea. Various high-powered oligarchs sit on its board, and Putin is – surprise, surprise – the head of the RGS.

Russian families out for a stroll, ladies in summer dresses, and young people all stopped to consider the photographs of the Arctic. Ample descriptions were interspersed between some of the photos, reminding people that Russia was a northern nation and has been so for centuries. All of the images were scenes of Arctic nature at its purest and most stereotypical: polar bears, beluga whales, walruses, and muskox. There were no photos of cities like Murmansk or Arkhangelsk or of nuclear icebreakers or oil platforms. 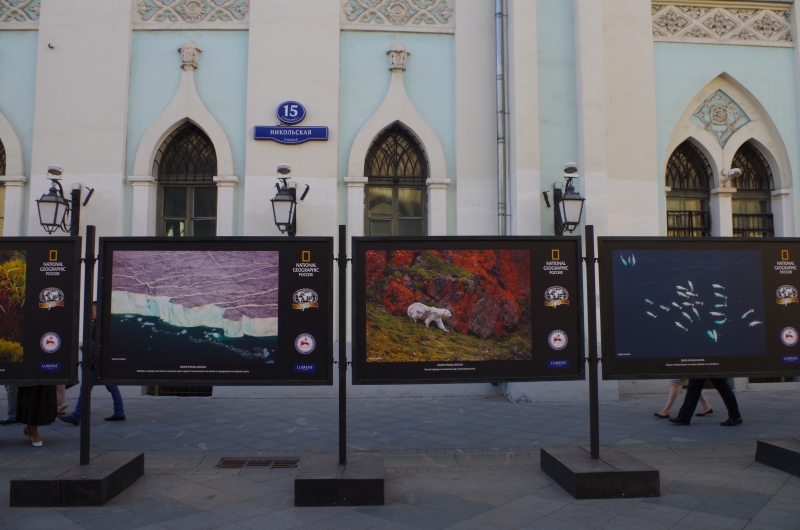 The second photo exhibit, sponsored by Russian Railways (RZD), was outside the Kazansky train station. The station is named after the city of Kazan, which Ivan the Terrible laid siege to in 1552, opening the door to Russia’s conquest of the Tatars. From Kazansky train station, trains come and go to Russia’s southeast, namely the cities of Kazan and Yekaterinburg (the trans-Siberian railway) and Ryazan. Trains to Central Asian cities like Tashkent and Bishkek also terminate at Kazansky. Given the constant flow of people from the Russian steppes and Central Asia through this station, it is a logical place to locate a photo exhibit on the monumental territory of Russia. The micro-geography of Kazansky train station encapsulates the enormous geography of the country as a whole.

The first photo in the exhibit was an aerial shot of the Crimean peninsula. There was no commentary about how Russia had recently annexed it. To an outsider like myself, the remarkable thing about its inclusion was perhaps how unremarked it was. It reminded me of how many Russian exhibits sponsored by the government are accompanied by a very small icon of a map of Russia, which now unfailingly includes Crimea. This sort of banal nationalism, as the social scientist Michael Billig terms it, is subtler than Lenin’s “monumental propaganda,” but perhaps more effective in the way it slips into the subconscious without asking the viewer to bow down in awe.

In the context of the whole exhibit, it seems no more remarkable that Crimea belongs to Russia as does Franz Josef Land, or any other Arctic locate featured for that matter. Unlike in the photo exhibit near the Kremlin, there was no sense of history or time with these photos: Crimea and Franz Josef Land appear to have been part of Russia since time immemorial, even though Crimea was only most recently incorporated in 2014, and Franz Josef Land not until 1914. Through this exhibit, in effect, the nation state projects itself both backwards and forwards across space and time, to paraphrase the historian Prasenjit Duara.

All of the photos in the RZD exhibit featured stunning landscapes, but not all of them were entirely natural. Strangely (to an American, at least), one featured an open-pit diamond mine in Sakha. Rather than being considered a blight on the landscape, in Russia, such enormous sites of extraction symbolize the country’s successful transformation and conquest of a most formidable nature – an accomplishment to be admired rather than hidden from sight. 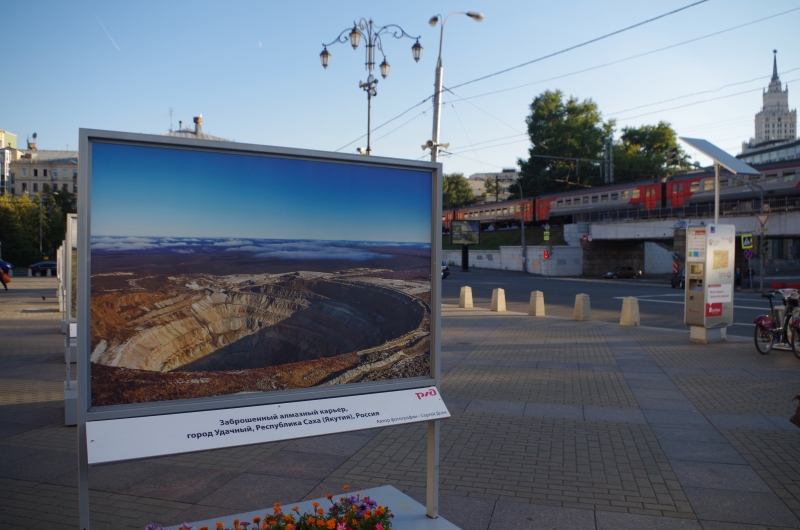 Ultimately, these two photo exhibits demonstrate the Russian state’s tendency to champion exploration. Statues, monuments, and metro stations celebrate pioneers and explorers in a way that far outdoes America, which might be more commonly thought of as a country that encourages its citizens to set their sights on the next horizon. One evening in Moscow, I came across the monument to Yuri Gagarin, the first person in space. In the gardens in front of the Kremlin, I found a tree planted on the day Gagarin flew into space. Later I explored the VDNKh, an open air exhibition originally designed under Stalin as a monument to the diversity of the Soviet Union. It includes enormous pavilions for places like Karelia, Kyrgyzstan, and Armenia, along with the Buran space shuttle (which to some might symbolize the end of the USSR, as the program was terminated after the country collapsed). Right outside VDNKh is Cosmonaut’s Alley, where an enormous bolt of steel rises into the air with a rocket at the tip. In front is a statue of the formidable Soviet rocket scientist, Konstantin Tsiolkovsky, and next to it are the busts of the Soviet cosmonauts who made it to the final frontier.

All of these photo exhibits, monuments, and statues are ultimately testaments to national exploration and conquest. They celebrate the forging ahead of a single country rather than mankind as a whole. In the wake of the tragedies in Paris and Beirut, it is worth remembering that exploration is at its best when it helps to forge a global consciousness that unites people rather than a national consciousness than divides. I think this cartoon by Zen Pencils, inspired by U.S. astronaut Edgar D. Mitchell, sums it up pretty well.